Day 1 is in the books

What a crazy day yesterday. First it looked like I had nobody to travel with, then I met Jim at the marina with his wife Denise, and he jumped at the opportunity to travel with me with about 12 hours notice. See full story here.
Jim and I arranged to meet at 6:30 a.m. at Sababa. He owns a similar Prestige flybridge boat, and I was happy to have someone aboard who knows the boat and is very experienced at traveling up and down the coast.

I went to bed after 11:00 pm last night after straightening out the boat, cleaning up, writing my blog, of course, and unpacking. I could't sleep because since the shore power on the boat is not working, I had the generator on, and it was really loud. Finally around midnight, I got up and turned off the generator and quickly fell asleep. I woke up around 4:00 all covered in sweat because without the generator, there's no air conditioning, and it got very warm on the boat. Not a great start for what I knew would be a very long and at times challenging day. By 5:00, I gave up lying in bed and took a shower and got the boat ready for the voyage. Turned on all the instruments, fired up the generator again, turned on the nav lights since we'd be traveling at dusk, had something to eat, and then sat around waiting for 6:30.

Jim showed up with Denise right on time, and we were on our way. 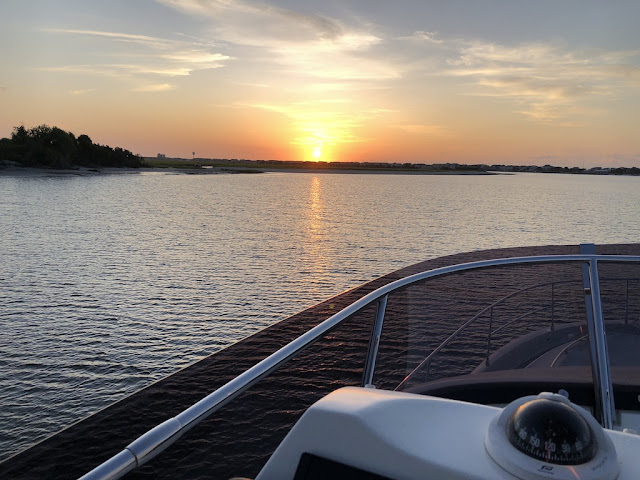 As we pulled out of Wrightsville Beach and headed to the ocean, I had some concerns about how rough the seas would be. The forecast was good, although it called for possible thunderstorms in the afternoon at Manteo. We had decided to go to Manteo rather than push all the way to Coinjock. As it was, this would be our longest and most difficult travel day, covering 183 nautical miles. 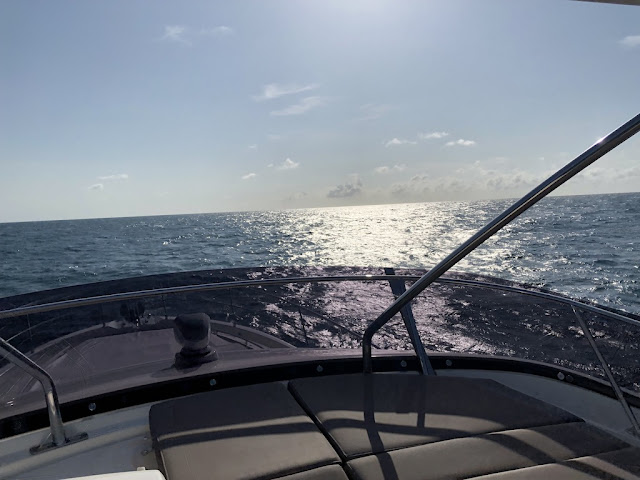 Driving in the open ocean is exhilarating. As long as the waves remain calm, you are there alone with nothing but the sky, the water and the boat. It's one of my favorite most peaceful places to be. Of course you know that at any time a squall can pop out of nowhere and ruin your day or worse. More on that later.

The waves actually got slightly big as we approached 2/3 of our way towards the Beaufort inlet. They were around 3.5 feet high, and some quite a bit higher. However, they were SouthWesterly waves, meaning they were going in the same direction as us, so we were basically surfing on them. The winds were about 15 knots also from the SW, so it made for a mostly pleasant ride. A little rough at the end, but nothing too crazy.

The inlet was a bit of an adventure as a very strong wind on our port side beam intensified. However besides taking off our hats so they wouldn't blow away, Jim and I had no real concerns. As we pulled into Beaufort and the canal of the northbound ICW, we saw several dolphins, which made my day.

We decided to stop for fuel despite Dennis's advice that we could easily make it to Manteo on one tank. I don't like to cut it close, and besides it was pretty calm in the ditch (slang for ICW).

After fueling, we headed up towards the Neuse River and from there into Pamlico Sound. The sound can be very intimidating and quite nasty. We dealt with that head on (literally) on our way South a month ago. However, today, we were going with the waves and the wind in our favor, and so it wasn't too bad. At least most of the way.

As we turned left and headed North to the final stretch where Pamlico meets the Croatan sound, I suddenly noticed a sharp bolt of lightning in the distance. There was a clear outline of a bad storm to our NorthWest, and it was moving East, as we were moving North. We were going 24 knots on a collision course with this storm.

On the rader, we could see that this was an isolated storm, but it was headed exactly to the same place we were. Jim had the very clever suggestion, which seems obvious but actually did not occur to me, that we slow down and let the storm pass. To me it was counterintuitive to see a lightning storm while out on a boat and to do nothing. I wanted to run for cover, but there was nowhere to go that made sense. Slowing down worked great. We could actually see the storm moving from left to right, and when it passed us, we made our way. Meanwhile, another storm developed to the West, and we saw it coming. We decided that we could beat that one, so we worked our way between the two storms (I kid you not) and got the Pirates Cove marina with no harm done.
Docking was quite intimidating as it was extremely windy in the marina, and I felt myself drifting into the large fishing boats that line the marina due to a strong current. The marina was not picking up on the radio, and I had left my phone down below, so I had no way to reach them. Luckily, someone saw us coming in, and a dockhand was waiting for us. Using every ounce I had of experience, guts, and mostly a complete lack of any choice, I managed to pull off one of the scarier dockings I've done without a hitch. Jim was extremely helpful in talking me through it as I backed up, and the dockhand jumped aboard to help with the lines. Jim is a real pro and got us tied up expertly. We set the fenders, and I felt really good and relieved. I fueled up the boat for tomorrow's run.
Jim and I rewarded ourselves for a great first day with pizza and beer at Nags Head Pizza Company, the same place that the girls and Tony and I had planned on visiting but did not end up going to because of the bridge that was closed on our way down and our reroute down the ocean. 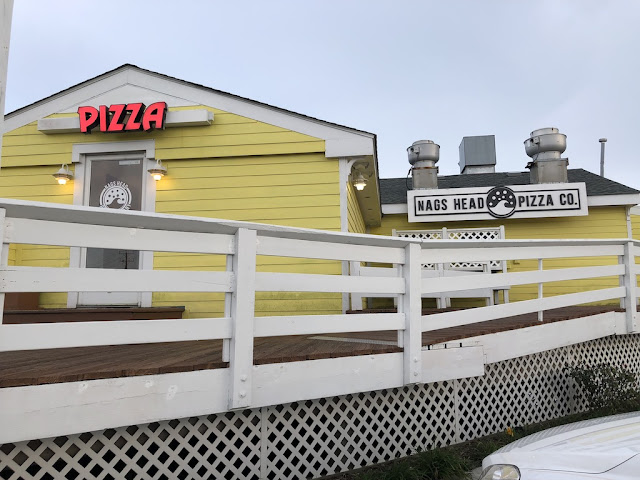 Here was the view from our table at this great pizza place. 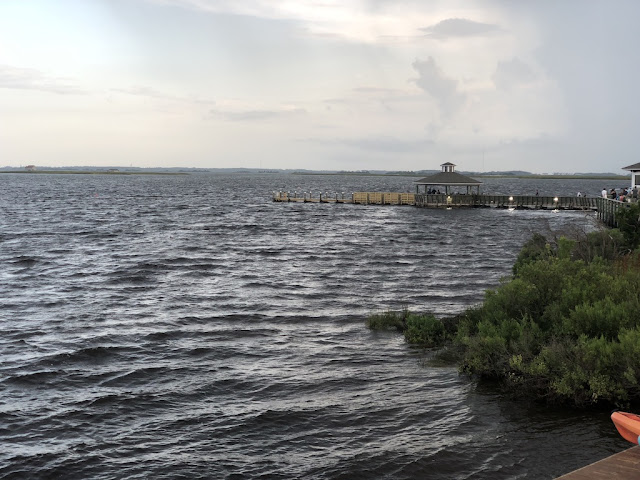 With no shore power, we've decided to try to sleep without the generator tonight. I found the screens that go in each window and set them up for the evening. It's cool outside, so we'll open the windows with the screens in and turn off the generator, and thus the A/C. We'll use the inverter to power the 110 on the boat to charge our devices off the house batteries. And in the morning, we'll go back on generator power. If this proves to be uncomfortable, then tomorrow night we'll try to sleep with the generator. Basically the choice is noise, uncomfortable temperature, lack of darkness (shades can't close with windows open), or some combination of these. Without shore power those are our choices.
I'm very excited about tomorrow's run. We're going to stay inside the ICW. It is just a gorgeous trip, and we'll have several bridges and a lock to deal with, but the trip is pretty laid back with lots of no wake areas to just take in the sites and relax. I expect us to leave at first light at 6:30 am and to arrive no later than 2pm, depending on our luck with the drawbridges.

It's calling for 35% chance of rain and scattered thunderstorms in Norfolk tomorrow around 4pm, but otherwise, our weather outlook for the rest of the trip all the way to Baltimore on Saturday looks very good. We'll try to time it so that we are in Norfolk well before the potential storms. Today, I learned how to be patient and let the storm pass you by. A very valuable lesson.
Posted by Avi Rubin at 8:35 PM