Parking at Tel Aviv University (and in this city in general) is not unlike my favorite hobby of playing poker. It requires patience, skill, and a decent amount of luck. In fact, for the last six months, getting into the parking lot at work was a test of wits. I arrived at the university gate armed with my letter from the Dean of Engineering stating that I am a visiting professor here. Most often, that did the trick. However, at times, the security guard was particularly prickly and would not accept the letter. "No sticker, no parking!" he would declare, sounding a bit like the Soup Nazi on Seinfeld. As the line of cars behind me grew, along with the volume of their honking, I would reason with him. "Listen, I am a visiting professor here. I need to get in to do my job. This is no way to treat visitors." Sometimes it worked, sometimes it didn't. Either way, I drew satisfaction from knowing that I was developing my negotiating skills in Hebrew, an important capability for day to day survival in Israeli society.

When I first arrived at the computer science department back in August, I filled out some paperwork requesting a parking sticker. I was warned that it takes some time because the bureaucracy is a bit slow (like Charlie Sheen is a bit nuts). After one month, I inquired about the parking sticker and was told that the form I submitted was no good as the process for obtaining parking stickers had changed, so I needed to fill out a different form. I happily complied. Two months later, as fate would have it, our rental car company offered to replace our car with a brand new one with 8 Km on the odometer, and I felt fortunate not to have received my decal yet. I inquired about the parking sticker and mentioned that I had a different license plate number. Well, that rebooted the entire process. Filled out forms again. Kept waiting. Mostly biked to work.

Last week, we had heavy rains, and I drove to work. My ability to negotiate and charm apparently faltered, as I was not allowed into the lot. After complaining to an administrator in the department, I was assured that my parking sticker would arrive shortly. Amazingly, on Sunday, I was told that my sticker was available for pickup at the university security office. I was working from home that day, but was so excited about the parking sticker, that I went into work. As I approached the campus security office, a little voice inside my head told me that it is never, ever this easy in Israel. I put the odds of my actually ending the day with a parking sticker near zero. Sure enough, while the security office was open, there was a sign that stated that parking stickers can be picked up on so and so days at such and such hours, and of course, I had missed the window for Sundays.

After only six and a half months in parking limbo, the story has a happy ending. I noted the hours for Monday and made sure I was at the campus security office at the right time. I received a beautiful blue parking sticker which I proudly affixed to the windshield of my car. That will get me in the gate from now on, I hope. Finding a spot once inside, well that's another problem. Meanwhile, I'll celebrate the small victory.

My experience overall at the university has been positive. I'm currently advising a masters student here, and the other day we had a meeting scheduled. He told me that he was in the miluim, which is the army reserves, so he would be a bit late. In Israel it is very common for people to have to suddenly leave their jobs or whatever they are doing and serve in the army for days or weeks at a time. It is part of society, and they are used to it. So, this student shows up in my office in full army uniform, and we had our meeting. When he turned to leave, I noticed that he was wearing a holster around his waist with a handgun. I couldn't help but think how different the dynamic would be with my students back at Johns Hopkins if they were packing heat. Lab meetings might have quite a different dynamic.


We now have less than four months left until we return to Baltimore. Elana is doing much better. She has a small group of nice friends, and is particularly close to one girl. I drove them to a Bat Mitzvah party last night (a weekly occurrence these days), and they were in the back seat giggling and yapping most of the way. She communicates with her friends mostly in Hebrew, and I think Elana is starting to enjoy being here. She is very excited about her upcoming birthday. However, she'll probably be the one most anxious to return home when this is over. Here is a picture of Elana and Tamara on the Tel Aviv Tayelet (boardwalk). 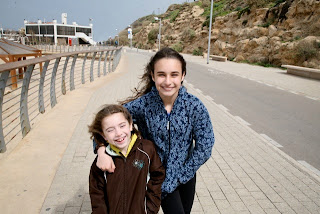 Ann is continuing her Hebrew studies at the Ulpan, and I've noticed now when we shop at the shuk (market), she often speaks Hebrew with the vendors when their English appears weak. Benny is enjoying his chess club and his soccer training and appears to be totally comfortable in Hebrew with his friends. Here is Benny leading a parade of Fulbrighters in the Lower Galilee. 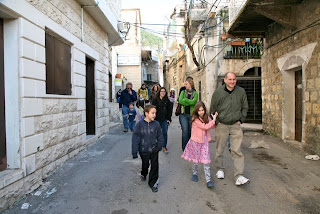 Tamara has fewer activities now because her jewelry making teacher and piano teacher each gave birth and subsequently took breaks from their activities. Still, she has some very nice friendships. Each of the kids seems to have found a "best friend" that they hang out with a lot, and the nice thing is that most of the time we can walk to their houses. Here are the twins in the lobby of our building. 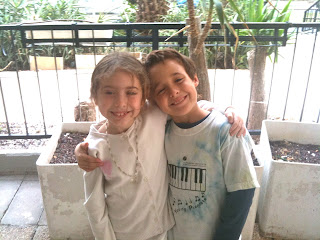 The last couple of weeks have been particularly fun because my parents are visiting. They have a great apartment downtown, and we spend time virtually every day either at their place or ours. Besides touring around, visiting the Nemal and the Shuk, we play a lot of bridge with them, and all I can say is that I'm glad poker is played for money and that bridge is not because my skills at the latter are quite lacking. My mom loves Israeli dancing, and she leads an Israeli dance troupe in Nashville at Vanderbilt University. Here is my Mom dancing along the Tayelet last weekend. 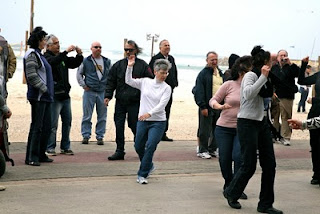 We are now very much looking forward to the upcoming holidays of Purim and Passover. These holidays are something special in Israel, and being here to celebrate them will be a highlight of my Sabbatical. In addition, my nephew, Ari, is having his Bar Mitzvah at the Western Wall in Jerusalem in a few weeks, and much of my family will be here for that.

We are planning a four day trip up North in about a month and a half to visit Akko, Rosh Hanikrah and the Golan Heights, places Ann has never been, and where I have not been for years. In May, we will visit with the Schechter 8th graders who will be on their Israel trip, and we've enjoyed the steady stream of visitors whom we have had the chance to meet and hang out with.

So, our trip is not quite winding down, but the finish line is in sight. We're in no hurry, but we'll be very happy to return home to our normal lives, and to see all our friends again.
Posted by Avi Rubin at 7:47 AM