Hanukkah in the Negev

Israel is beautiful. The splendor of the Nevada desert, the awe of the grand canyon, the tranquility of summer in Aspen, Colorado, and the beauty of Monterrey, California are all  packed into the Southern portion of this country, known as the Negev, in an area smaller than half of New Jersey. (Everyone always compares the size of Israel to New Jersey, and who am I to differ?) For Hanukkah, we took a family road trip to the Negev for six days. A full photo album of the trip can be found here.

The first day, we picked up the kids from school and drove two hours to a Beduin tent camp site situated about halfway between Sde Boker and Mitzpeh Ramon. I'm not one for roughing it, so we opted for the heated cabins over the communal tents. Dinner was served Beduin style, on rugs in the sand in an open tent. As soon as we were seated a tray containing the entire dinner arrived. The food consisted of roasted chicken, pita bread, hummus, potatoes, rice, and various salads. I was expecting to eat with our hands, but there was plastic silverware. 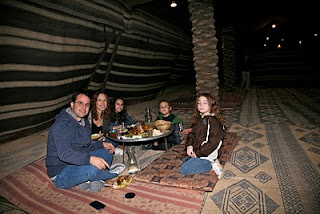 After dinner, we walked around the camp site and huddled around a large fire they had built. Then, we went back to our cozy cabin, grateful we did not have the idea of roughing it and sleeping in the open tents. It was quite cold out. Before bed, I explained to the kids how to put their socks over their shoes so scorpions would not get in.  This was totally unnecessary, but I got a perverse pleasure from their seriousness on this matter. I learned this trick from my survival days in the desert, or maybe it was from a movie I saw, I can't remember.

The Beduin village (a.k.a. tourist trap) boasts a herd of about 20 camels, and the next morning, we took a ride on these large, gentle, awkward animals. 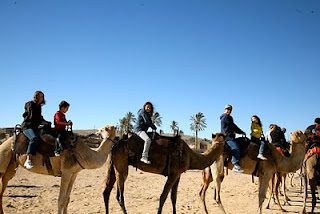 After our camel ride in the desert, which lasted about 30 minutes but left a pain in my buttocks for a bit longer than that, we drove to the Mitzpeh Ramon crater, Israel's version of the Grand Canyon. We took a short hike and then made several stops on our way South. 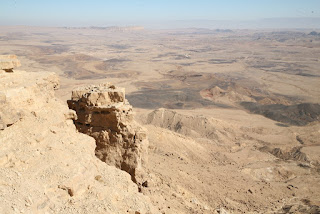 At one point, there was an area with mounds of colored sand that the children used to fill test tubes in artistic fashion. 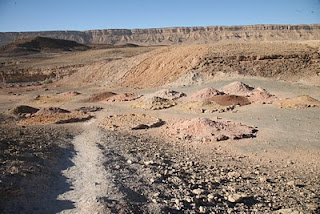 After Mitzpeh Ramon, we headed South again, with our sights set on Eilat, a resort town on the edge of the Red Sea, bordering Jordan and Egypt. The trip took about two and a half hours from our last stop at Mitzpeh Ramon.

Eilat is known for its fancy waterfront hotels, expansive coral beaches, underwater observatory, and great nightlife and restaurants. We stayed at a place called Isrotel Agamim, about a 10 minute walk from the water. We opted for the half board option, which included breakfast and dinner. We arrived there on Friday night, and I was pretty disappointed with the dinner. However, my opinion changed on subsequent nights when the food was nothing short of gourmet, and Ann observed that since the restaurant was kosher, Friday night dinner consisted of food that had to be prepared in advance because no fire or electricity could be used on Shabbat. This explained why the options were so limited that first night.

The hotel had a ballroom reserved for lighting Hanukkah candles each night, and we were given the candle lighting times. I expected everyone to show up and light as a community, but strangely, each family picked a spot and a hanukkiah of their own and said the blessings themselves. There were parallel renditions of Maoz Tsur throughout the rooms, sung in various keys and intonations. It was quite a sight. We took turns with a different family member lighting each night.

On our first day, we went snorkeling in the coral reef area, with spectacular underwater views. This picture was taken from the underwater observatory. 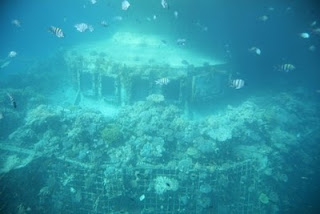 The next day, we took a glass bottom boat tour for an even better view of this precious underwater phenomenon. 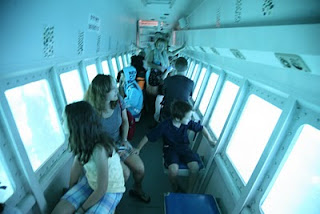 Here are some more pictures showing the beauty of Eilat. 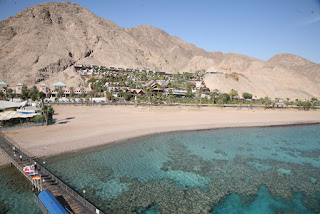 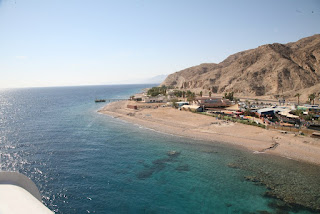 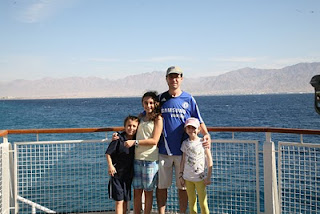 We spent one of our afternoons and evenings in Eilat in Timna park, which needs to be added as a "must see" to anyone traveling to Israel. This park consists of some incredible natural desert sights, and several man made ones. The area was used in ancient times as a copper mine, and there is access (for those with less claustrophobia than I have) to the underground caves. The rock formations are like nothing I've ever seen before, and driving from one spot to the next, we felt that the views could not be more spectacular. The rock below is called the mushroom, for obvious reasons. 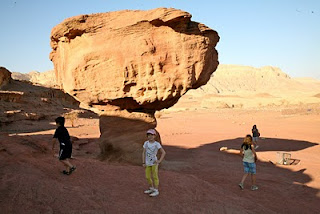 These rock formations are known as Solomon's pillars, although we were disappointed to learn that King Solomon was not actually here, nor was he in historic times. 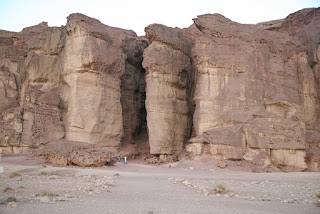 Here is Benny, pictured after climbing through the hole in the rock at the top of the picture. 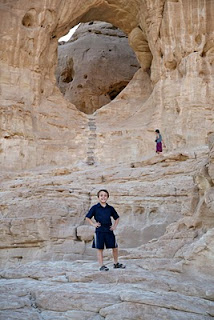 This view of a naturally formed bridge in the rock is stunning. Timna park was historically significant in large part because there was an oasis of water, which made it habitable. The children filled platic jars with colored sand in front of the Timna lake, and later everyone at the park participated in a Hanukkah candle lighting ceremony. 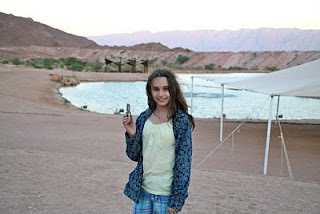 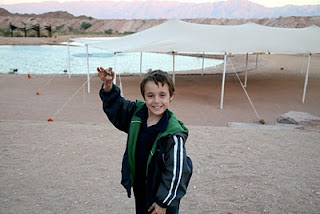 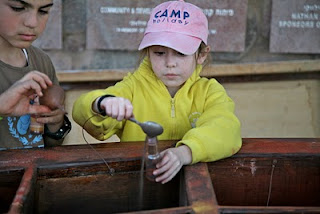 After three fun filled days in Eilat, we headed due North (the only direction to drive and stay in Israel) and stopped at the Hai Bar nature preserve. The place provides refuge for and rehabilitates endangered species. We took a driving tour through the park, guided by a CD, which explained the history of each of the species of animals in the park. 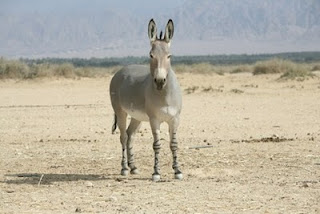 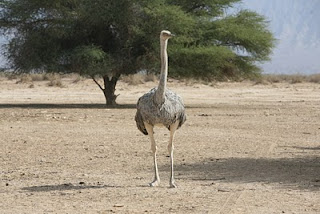 We stopped in Mizpeh Ramon for lunch, and then visited an alpaca farm, where the children rode alpacas and their father tried to ignore the smell. 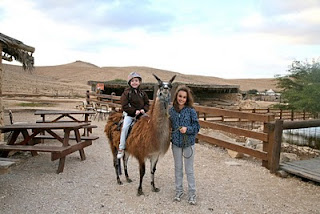 After the farm, we headed further North and spent the night in a Kibbutz, where we had booked sleeping accommodations for two nights. At dinner time, the food in the dining room was our least appetizing meal of the trip, and we made a note not to eat there again the second night.

The next morning, we drove to a national park called Ein Avdat. This is one of the real national treasures of Israel. Unfortunately, the park has a hiking path that becomes one way about halfway through. There is a steep climb in the rocks, and given that 1,500 people take the hike in one day, they do not allow you to backtrack. Most tour groups have their bus drop them off and then meet them on the other side. As we were there with our car, once we reached the halfway point, I had to backtrack, get the car and drive to the other side to meet the family. Backtracking was very difficult, as there were several steep stairways carved out of the rock, full of Israelis who did not appreciate me going against traffic. Some of them expressed this to me in colorful language that I'd rather pretend I did not understand.

Ein Avdat has some of the most breathtaking views anywhere. 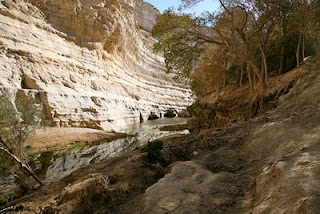 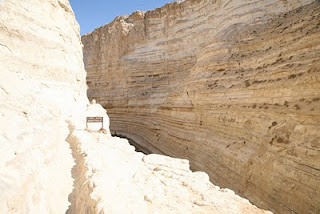 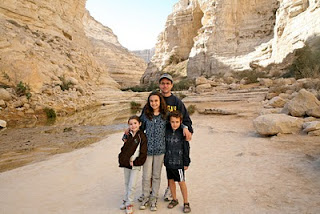 This stone staircase below is the one I had to navigate against traffic. I made my way bit by bit as people passed me and gave me a hard time. It was pretty scary. At one point, an Ibex startled everyone by running up the cliff side. The animal was disoriented by all the tourists, and it was actually quite scary. So much so, that everyone below him went back down, and everyone above him went back up. The animal left, and I got to start my descent against traffic from the beginning, with a bigger backlog of people at the bottom. It took me 45 minutes to get down. 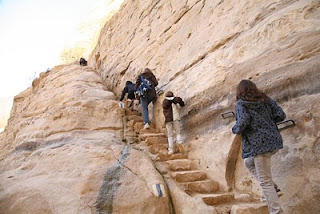 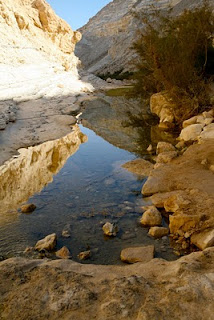 In the afternoon, we drove to nearby Sde Boker, which is where David Ben Gurion spent his final years, and where he is buried. We visited his tomb, which overlooks the desert crater. 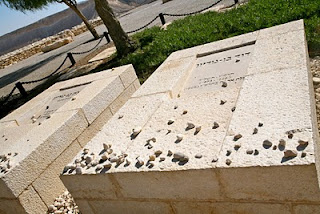 And, behind the tomb, we took one of the few family pictures with all five of us. 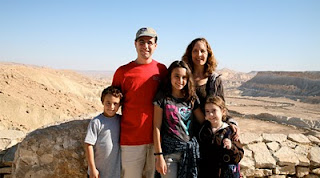 We returned to our Kibbutz, which had an indoor, heated pool, quite rare in Israel, and the kids swam and played for a while. Then, we decided to drive to Be'er Sheva for dinner. We found a great Asian restaurant which was quite better than the Kibbutz food, and then went back to the Kibbutz for our final night. In the morning, we drove a couple of hours home to Tel Aviv, and two days later the first storm of the year, a massive one, hit the country. Pretty good timing!

You cannot and should not visit Israel without a tour of the Negev. It's natural beauty is compelling, and all the major sights are within short driving range. One would have to purchase several airline tickets and budget several weeks of travel in the US to see a comparable, diverse set of marvels that can be seen in a six day trip with easy, short drives, in Israel.
Posted by Avi Rubin at 3:58 AM